The Scoop: Church of 8 Wheels may be housed in a former San Francisco church, but it’s not the type of sanctuary you’re probably thinking of. Here, singles, couples, and families take to the skating rink. At every Church of 8 Wheels service, visitors listen to classic funk and gospel music, and skate under lasers and black lights. Founder David Miles, Jr., also known as “the GodFather of Skate in San Francisco,” wants anyone with a passion for skating to find a home at his skate nights.

In November 2013, David Miles, Jr., aka “the GodFather of Skate in San Francisco” and a frequent skating event organizer, decided to throw a party at a dilapidated former church.

“Everything was in shambles. We cleaned it up enough that we could have our party,” David said of the event.

On that first night, David and his team played disco and funk music, strung up some twinkle lights, and had a great time. The church owner liked the event so much that he let it continue week after week. That’s how Church of 8 Wheels was born.

From there, the event grew. People come from around the city and even from elsewhere to skate in this friendly, welcoming community.

Couples who want to attend a Church of 8 Wheels event can just pick up their skates and enter the rink. David compares it to Dorothy going from her black-and-white world to the colorful world of Oz. Lights line the walls and intersect with the original stained glass windows. Hundreds of skaters of all levels zoom round and round. When you want to watch the lively crowd, you can take a seat in one t=of the church’s original pews that line the rink.

And the music is one of the biggest draws for a lot of skaters.

“When Donna Summer comes on, that music strikes a nerve. It hits the epicenter of your youth. When you were a kid and heard this music, it comes back like a flood when you’re on the rink,” said David.

Couples Can Make New Friends at the Church

Skating was never out of fashion in San Francisco, but Church of 8 Wheels isn’t like any other rinks in town. It has lights and good music without the vibe of a nightclub.

“There’s not much like it. People are drawn to the Church of 8 Wheels, and they have a great time. All the things that make you different and distracted in your life don’t seem to penetrate this bubble of fun,” David told us.

One way Church of 8 Wheels differs from other San Francisco venues is its friendly vibe. People of all ages, races, and walks of life have found their way to a skate night. And they all have a love of skating and adventure in common. 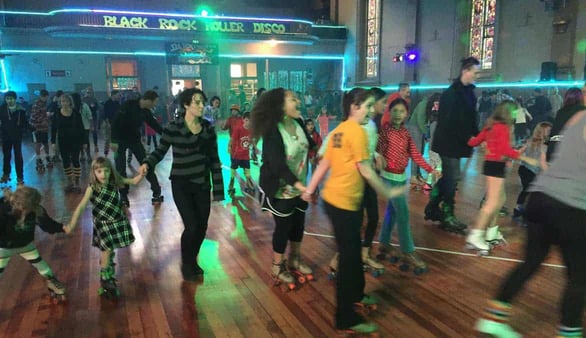 Church of 8 Wheels skate nights are eclectic, fun, and filled with great music.

“Many skaters come dressed up in disco outfits, even if we don’t have a themed night,” David said. “It’s like you’ve entered a magic palace. People are friendly and fun. They’re happy. It’s a contagious feeling as soon as you walk in the door.”

That kind of friendly environment makes it easier for singles to meet each other and couples to make friends. David said that skating — and sometimes even falling — makes people drop their guard.

“That whole interaction of helping and showing people how to skate is an opportunity for people to meet each other. I know a lot of couples who have hooked up through skating,” David told us.

At the same time, Church of 8 Wheels staff wants to ensure that all guests feel comfortable and secure on the rink. That means that the staff is wary of anyone who skates too aggressively.

And to include even more people in the fun, Church of 8 Wheels also goes mobile. David said the church has a portable roller rink that it uses to spread its “rolligion” at events, festivals, fairs, and more.

Preparing for a Party After Reopening

As did many businesses, Church of 8 Wheels closed in March to prevent the spread of Covid-19 and still had not opened as of July 2020. But David said he and his large group of fans can’t wait until the space opens again.

David and his team say they want to ensure all skaters stay safe when returning to the rink. Skaters will have to wear masks and have their temperatures taken before they can come inside. The team will place hand sanitizer stations around the rink, as well.

“We’re also trying to scrub the air with the UV-C light. I’m trying to create a situation where the light floats around,” David said.

Unfortunately, Covid-19 isn’t the only threat to this party.

Another aspect that makes the Church of 8 Wheels so popular, perhaps, is that it could close at any time. When the event started in 2013, the property owner said that the church could be developed into condos or housing within two years. That was six years ago. Now, the owner is trying to develop the church lot again — though David said he hopes to have at least two more years in the space.

If that doesn’t work out, David and his team said they are looking for other empty churches to find a new home.

Whatever the future holds for Church of 8 Wheels, David said he knows how to adapt. He’s been attending Burning Man for 20 years, and each time he’s built a new roller rink. He’ll be similarly creative if he has to move church locations.

“We’ve been doing this for six years, and it never gets old. It’s an escape. It’s all based on this inclusive, free experience we provide on roller skates,” said David.

David’s passion for skating drives his life. He moved from Kansas City to San Francisco in the late 1970s in search of a new beginning. Then, while visiting Golden Gate Park, he saw thousands of people skating in the city park, and he knew he’d found his life’s calling.

Soon after, when city officials wanted to ban skating in the park for safety reasons, he was thrust into a leadership role and worked with the city to find solutions. He’s been a skating advocate ever since.

David’s interest in using skating parties to build community camaraderie started when he met his wife at one such event more than 40 years ago. He recalls that she couldn’t skate at all, and he helped her learn the ropes.

“The atmosphere of the roller skating experience makes it easy to meet somebody. The tough guy isn’t so tough when you put some wheels on him, and he can hardly walk. Skates open you up.” David said with a laugh.

He also leads the California Outdoor Rollerskating Association, which holds regular Friday night disco parties and even tried to break the world record for the longest chain of roller skaters back in 2011.

David said he is excited for when Church of 8 Wheels can open back up because he wants to give people the escape they’re seeking again.

“I want everybody to have a great time. I love skating, and I love disco and funk. When you enter this world, you leave everything behind,” David said.