Bureo: Give Your Eco-Conscious Partner Sunglasses, Skateboards & Other Unique Gifts Made from Recycled Plastic

The Scoop: As ocean lovers themselves, the founders of Bureo saw firsthand how widespread plastic pollution was on beaches and in waterways throughout the world. So they decided to develop a process to turn that plastic into materials for useful consumer products, including sunglasses and skateboards. They started by designing a process that converts discarded fishing nets that would otherwise end up in the ocean into usable plastic. Bureo gives back to the communities that participate in this recycling process, making it a great place to look for gifts for friends, family, or that special someone while supporting a worthwhile effort.

A beach can be a picturesque place to take that special someone for a sunset stroll, but reminders of a growing plastic problem continually wash ashore, even in the most idyllic settings.

The founders of Bureo — David Stover, Kevin Ahearn, and Ben Kneppers — saw that widespread plastic pollution and simply couldn’t ignore it. Especially in the ocean, where they enjoyed spending most of their free time.

“We have been in and around the ocean our entire lives,” said Greg Swienton, Sales and Marketing Manager at Bureo. “And we always saw plastic pollution and wondered what we could do about it.”

The sheer magnitude of ocean pollution is alarming, and about 8 million more pieces of plastic make their way into the ocean every day.

Though Bureo’s founders had steady careers, their interest in making an impact motivated them to brainstorm ways to recycle that oceanic plastic back in 2013.

“They galvanized over the issue,” Greg said.

Bureo’s founders saw widespread fishing net pollution and decided to do something about it.

That’s how Bureo was born. The founders decided to focus on one of the most significant contributors to plastic pollution in the world: discarded fishing nets. Fishing nets are a significant problem because most are made from nylon, which never breaks down and can entangle many types of marine wildlife.

“Through research, we found out that fishing nets are much more harmful in the marine environment than most people thought,” Greg told us.

So Bureo created partnerships to secure used nets from fishing operations in South America. Then the company developed a process for converting this nylon into a plastic material that can be used to produce consumer goods — from sunglasses to skateboards.

Bureo’s offerings have found popularity with environmentalists, ocean-loving people, and skateboarders, among many others. Consumers support the company’s mission of protecting the ocean by eliminating fishing net pollution, inspiring change, and creating a sustainable positive impact.

The Bureo founders initially wondered if it would even be possible to recycle fishing nets into usable materials. They also talked about whether they could build a viable business model based on that premise.

Eventually, the company discovered how to build partnerships and the processes that transform nets into usable material. Bureo started by identifying a country where fishing-net pollution was a significant issue — Chile. As it turned out, the country had not only a large fishing industry but also a supportive government that even provided Bureo with a grant to develop a recycling program.

“We work with fisheries along the coast, from small fishermen to larger, commercial setups. We also go to these fishing towns and talk to the people,” Greg said.

When Bureo finds a fisherman partner, they ask them to save their fishing nets after they can’t use them anymore. Bureo uses whole nets, or even smaller pieces, in its recycling process.

The collected nets go to a warehouse where they are sorted, cleaned, and baled. The materials are then transported to Bureo’s network of recycling partners where they are cut up and shredded by an enormous machine.

After the net is shredded into what’s called “fluff,” it is fed into a machine called a pelletizer, which creates small plastic pellets. Those are the raw materials that the company uses.

“Once you have the pellets, you can use it for any injected, molded part. You melt the pellets down into a mold. When you open up the mold, you have your finished part,” Greg said.

Once fishing nets have been converted into plastic pellets, they can be used to create any number of plastic creations. So far, Bureo has mostly developed them into products that outdoors-minded people would appreciate, including sunglasses, skateboards, and Frisbees.

“Our products resonate with people who spend a lot of time outdoors, especially by the water. We have a strong following of surfers, as well,” Greg said.

Bureo partners with companies like Costa and Patagonia to make sunglasses, which sport frames made of the recycled fishing nets. Even the sunglass cases are made with recycled materials developed by another Bureo partner, ReFleece.

The skateboards are also constructed from recycled materials. The wheels are made, in part, using vegetable oil, and each skateboard from that recycled plastic keeps 30 square feet of fishing netting out of the ocean. 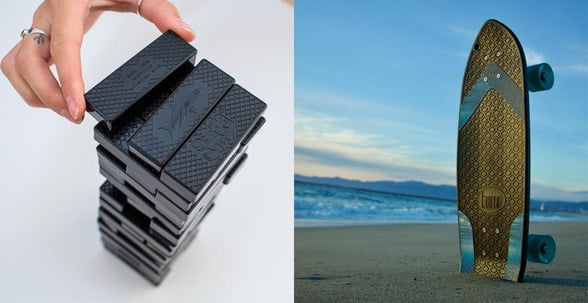 Other products from Bureo include a Jenga set and a sturdy surfboard fin, and the company said it believes that the recycled nylon fins work better than fiberglass or plastic injection fins.

These products have received rave reviews from the company’s eco-conscious customers, who often buy them as gifts for a special someone.

“They work well as gifts because there’s such a good story behind them,” Greg said. “It’s a more meaningful and sustainable push behind the product.”

Though the company has found success, Greg said that one of his greatest pleasures is seeing others who want to build innovative sustainable businesses like Bureo.

“When you get a message from a stoked kid or entrepreneur who’s excited about what you’re doing, you remember why you’re doing it. We are actually impacting and inspiring others to think differently,” he said.

Looking Toward the Future, Bureo is Connecting With Communities & Companies to Promote Recycling

In six years, the Bureo founders turned their big idea into a reality, but the company isn’t just floating with the current; Bureo has big plans for the future.

Its next objective is expanding the fishing net recycling program in South America. The company currently has 50 local partners in Chile and Peru but aims to find many more fishing operations to work with.

“Our goal is to expand the net collection program throughout South America so we can recreate what we’re doing in Chile,” Greg said.

Bureo offers considerable benefits to the communities it works with. For every kilogram of netting it collects, Bureo gives money back to the community to complete development projects. In collaboration with community leaders, Bureo has also developed solar programs and recycling stations for fishing port communities throughout Chile.

Outside of the fishing towns, Bureo is developing partnerships with other companies focused on sustainability. Recently, it worked in collaboration with Trek to develop a bike water bottle holder called the Bat Cage.

As Bureo continues to find more fans and develop more connections, Greg said the team remains dedicated to its mission.

“We’re running a business that not only makes money but also does good for humans and the environment,” he said.