The Scoop: Couples who enjoy old-school steakhouses often love the steak, but may find the other menu items a little lacking. Stratis Morfogen experienced that dilemma when dining at traditional New York City steakhouses, so he opened Brooklyn Chop House to mix things up. He kept the elements that worked, including aged porterhouses and a classic date-night atmosphere, but expanded the menu. He also adopted a concept he holds dear: LSD, or Lobster, Steak, and Duck. The idea is that diners can order tasty lobster and Peking duck — along with dumplings and more — that are just as memorable as the steak.

Stratis Morfogen, has a lifetime of experience in the restaurant industry. His family owned a diverse group of restaurants — ranging from Greek diners to steakhouses to Chinese eateries — while he was growing up.

His experience in the restaurant business also made it less than pleasurable for Stratis to eat out at some of New York City’s best steakhouses.

“When my wife and I went to a steakhouse, I’d be enjoying a steak, and she’d choose a piece of fish, creamed spinach, and a baked potato,” he said.

The problem wasn’t the steak, typically a dry-aged porterhouse, which was always tasty. Instead, the other menu items were lackluster. At most traditional steakhouses, the sides aren’t of the same caliber as the main course.

That’s why Stratis opened Brooklyn Chop House to ensure that the sides and other menu items are just as delectable as the steak. If one partner doesn’t like beef — like Stratis’ wife — couples can still enjoy a high-quality date night at the restaurant.

“I believe that the co-star at a usual steakhouse is not up to par with the star, which is the dry-aged steak,” Stratis says.

So, he came up with a unique concept in the steakhouse world: LSD.

“Not the drug!” Stratis said with a laugh. “LSD stands for lobster, steak, and duck. I thought that if you could combine that great aged porterhouse with a salt-and-pepper or ginger lobster and a Peking Duck or a Beijing Chicken, that would be something exciting.”

The concept took off, and the restaurant started gaining a loyal following of diners and accolades for a menu that guests had never experienced elsewhere.

“Our crowd is not going to eat at their father’s steakhouse anymore,” said Stratis, the restaurant’s Executive Managing Director.

An Inviting Atmosphere for Special Occasions

Stratis was excited about opening Brooklyn Chop House because it combined so many influences: the traditional steakhouse, Asian cuisine, and even the late rapper Biggie Smalls, aka The Notorious B.I.G. One of Biggie’s friends, Brooklyn Chop House Co-Owner Robert “Don Pooh” Cummins, wanted to honor the rapper by covering the restaurant’s walls with his friend’s lyrics.

The restaurant’s location is also memorable. The eatery is actually in Manhattan but gets its name from its proximity to the Brooklyn Bridge. The Beaux Arts building, where the restaurant is housed, was built in 1896, and a chain restaurant was in talks to move in before the building’s board decided it wanted a business that would preserve the space’s historic character.

Brooklyn Chop House did that.

Brooklyn Chop House kept the historic character of the Beaux Arts building, which was built in 1896.

The decor includes brick ceilings, nearly floor-to-ceiling windows, and black-and-white tile flooring. A bar in one part of the restaurant evokes the turn of the century with its warm colors, antique lighting, and tall chairs.

Stratis suggests the restaurant’s candlelight, leather booths — some of which even have curtains — and intimate corners make Brooklyn Chop House a romantic place for a date. At night, the restaurant’s dark lighting and music also set the mood for connecting with a partner.

Stratis said it’s the ambiance, combined with the unique menu, that makes Brooklyn Chop House such a popular date-night destination.

“The energy is good because of the feng shui, and it’s become a hot couples spot. I’ve opened 17 restaurants, but there have been more proposals in Brooklyn Chop House than any other,” Stratis said.

Building a Diverse Fanbase of Couples and Daters

Brooklyn Chop House is an excellent spot for couples who enjoy variety. One partner might not like steak, but can order something just as memorable. Couples can even share a steak if they desire.

The cornerstone of the eatery is its 30- to 35-day old steaks and chops. Two steak lovers can order a 48-ounce dry-aged porterhouse designed to share. Or, one partner can choose a 16-ounce filet mignon instead.

Many diners also save room for Brooklyn Chop House’s other offerings. 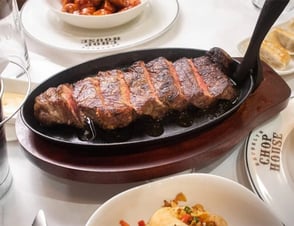 Brooklyn Chop House offers other high-quality meals in addition to its steaks.

The lobster part of its LSD combo is a two-pound salt-and-pepper lobster or ginger and garlic lobster. The duck is an authentic Peking Duck that’s cut tableside by a server.

Brooklyn Chop House may not be a traditional steakhouse, but that doesn’t mean that old-school steak enthusiasts are excluded. The restaurant attracts a wide range of diners from their mid-20s to late-60s. If couples have a few guests in tow, they can order the entire LSD experience — suggested for parties of five or six.

This unusual experience has garnered Brooklyn Chop House a lot of fans on social media.

“We use the hashtag #noplaceonearth to describe our experience. There’s no place on earth where you could get this menu. People are having a good time. They’re putting it on social media, and our reputation has spread,” Stratis said.

Brooklyn Chop House is Growing in Popularity Alongside Its Sister Restaurant

The care and originality Brooklyn Chop House puts into its dining experience has earned it many accolades, including being named the best steakhouse in New York by Newsweek magazine.

“It’s mastered the classics — an excellent porterhouse for two, an insanely tender ribeye — but that’s where the ‘classic’ ends. The other half of the menu offers Asian-inspired dumplings and small plates. (For a steakhouse, the xiao long bao, or Shanghai soup dumplings, should not be this good.) Even the fun-but-unorthodox Philly cheesesteak dumplings are excellent,” reads the magazine’s review.

One of the restaurant’s sides is so popular that it’s getting its own establishment: Brooklyn Dumpling Shop. The steakhouse offers popular dumpling hybrids, including pastrami dumplings, bacon cheeseburger dumplings, and lamb gyro dumplings.

Brooklyn Dumpling Shop will focus exclusively on serving dumplings, with a total of 32 varieties available to diners. The experience is entirely different, as well, as the dumpling shop will be contactless and open 24 hours a day.

Those who can’t travel to New York may still have the chance to enjoy the dumplings in their city. Stratis and his team have already franchised 500 Brooklyn Dumpling House locations around the country.

Stratis has successfully turned the traditional steakhouse structure on its head. Brooklyn Chop House guests can order Asian-inspired options and be sure the entire menu is just as memorable as the steak. Still, the restaurant preserves its legacy and New York City history with a classic, intimate atmosphere.

All of these certainly equate to a date night to remember.

“If someone is trying to impress someone on a date, they’re not going to have the same culinary experience like this unless they come here. There’s no other place on earth,” Stratis said.