The Scoop: Sex trafficking, or commercial exploitation, is a form of slavery that is surprisingly common in the United States — and throughout the world. Every day, women, girls, and sometimes boys are groomed and manipulated into prostitution by people who prey on their vulnerabilities. Breaking Free is a survivor-led agency that works to help victims of sex trafficking escape while also teaching men to understand the horrific impact that results from satisfying the demand for these services. Its programs range from group therapy to housing help, and the group is working to raise awareness in more communities throughout the world.

For people who haven’t come in contact with sex trafficking, it may be hard to imagine how common it is. While it’s nearly impossible to accurately count victims of these acts — which occur in the shadows — the estimates are shocking. According to experts, around 20,000 people are trafficked, in one form or another, each year in the United States alone.

An estimated 300,000 children — many of whom are in foster care — are critically at risk of becoming victims. Native American women are also frequent targets, as are migrant women who end up exploited as commodities online.

Predators involved in sex trafficking often look for vulnerable women. These women may have a drug addiction, recently ended a long-term relationship, find themselves alone in a strange place, or get lured in through online dating.

Breaking Free provides women with the resources they need to escape — or recover from — exploitation.

The problem touches nearly every community, according to Lori Paul, the Communications and Development Specialist for Breaking Free, an agency working to help end sex trafficking.

“Sex trafficking and prostitution prey on all our vulnerabilities, and when we overcome those vulnerabilities, that’s when we are empowered to end it,” Lori said. “That’s key to everything we do. We meet and fill those areas of vulnerability, so they are no longer a source to be preyed upon.”

Breaking Free was founded in 1996 by Vednita Carter, a sex trafficking survivor herself. Today, CEO Terry Forliti, another victim of trafficking, runs the organization.

Lori said that Terry’s story illustrates how sex trafficking can happen to anyone. Terry was a successful professional working in IT in a medical department when her marriage fell apart. To mask the pain, she turned to drugs, but her drug dealer was also a sex trafficker.

After she lost her kids and found herself in jail, she learned about Breaking Free and the resources it provided. After working through a treatment program, she broke free from her situation, and she became more involved in Breaking Free’s vital mission to help others.

Sex Trafficking Can Begin With a Simple Date

Lori warns that online dating, with meetups that may take place in private settings, has made it even easier for predators to prey on women. Lori’s own story started with a date soon after she left college. Lori, who has a pleasing, passive personality, said she met a man who took an interest in her while she was working as a hostess at a nightclub. He started buying her gifts, making her feel special and eventually brought her to a hotel.

“I had gone through the grooming process. In my mind, I was desperate for love. We hear a lot of people having been swept in with that,” she said. ‘It was textbook how he came in and bought me things and asked me to do things for him. He said, ‘You can be one of my wives.’ I thought maybe I didn’t hear him right, but I never forgot that.”

It’s important for women, especially, to be careful when it comes to dating. Lori recommends that women meet potential partners in public until they feel very comfortable with them. If they plan to have a drink, they should be aware that bartenders are often on the payroll of the trafficker. So order a bottle that you can see opened in front of you.

Lori also recommends that women get a clear understanding of their boundaries. If someone is encouraging you to do something that makes you uncomfortable, take that as a warning sign. Also, don’t be scared to do a little research on the person before you accept a date.

“Look at their social network. Who is on their friend list? How transparent are they? If they are hiding some things, they are probably hiding more,” she said. “Do your due diligence and research on this person. Use social networks significantly because that will tell a story.”

Men Can Help by Putting an End to the Demand

At one point, men interested in prostitution were typically middle-aged, married, and wanting to spice up their sex lives. But, today, that’s not the case. Lori said that the demand now starts with many 18-year-old men, who aren’t necessarily from a large city.

As a result of what they see in pornography, men addicted to sex tend to have a preference for younger women, and their sexual relationships often become increasingly more violent. When that behavior is normalized, it can be difficult for girls and women to see the warning signs before it’s too late. 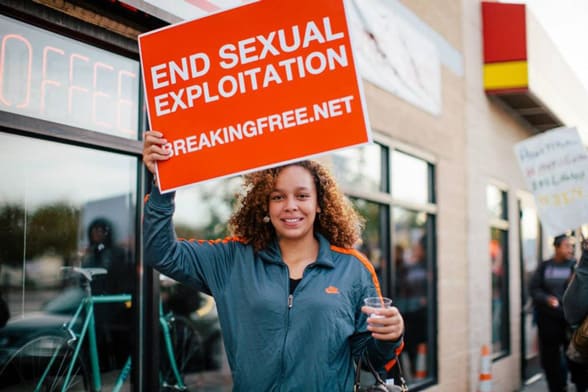 Many women, and men, get involved to help further Breaking Free’s mission.

One of the men who works for Breaking Free was active in gangs when he was young, so he saw firsthand how big the trafficking problem was. But even his experience couldn’t stop his own daughter from being taken by traffickers. It took him seven years to get her home again, and, today, it’s part of his mission to help families get their daughters back safely.

According to Lori, it is essential to remember that the men who participate also have vulnerabilities that may cause their behavior.

“Just look at what culture has done. They may be experiencing misinformation about what it means to be a man,” she said.

Breaking Free’s staff works directly with women who are at risk or have found themselves victims of sex trafficking. The organization offers a wide variety of programs designed to help them address the vulnerabilities that made them targets in the first place.

The team works with agencies to provide resources to end poverty, homelessness, drug addiction, and domestic violence. Breaking Free also holds educational support groups so women can share their experiences and understand what happened to them.

One program called Sisters of Survival lasts 14 weeks. Lori said it may take time to get women to see how they fell into such a tragic situation and realize they need to change.

“It often takes a woman eight tries to get out of it because of the trauma. When you’re in a lifestyle that’s all you know, you fall into it more,” Lori said. “With our Sisters of Survival, it’s a deprogramming. It’s teaching the language of what’s happening.”

Once women graduate from that program, they can get free help with lingering legal issues or family concerns. Breaking Free also offers access to two 18-unit permanent housing facilities, and maintains a speaker’s bureau and a writer’s bureau for survivors who want to share their story to help others.

It also organizes alumni programs that allow women to enjoy a fun day hiking, fishing, or getting manicures and pedicures together. For many, it’s not easy to realize that they can be treated to a fun day without having to “work it off” with sex later.

“Whatever a woman needs, we’re there,” Lori said. “What does she need right now? We try to help her find ways to fulfill that.”