The Scoop: Dana Donofree was planning to embark on a career in fashion design when she was diagnosed with breast cancer at age 27. After treatment and a mastectomy, her cancer went into remission, but she still didn’t feel comfortable with her body. So she used her fashion background to create AnaOno, a company that designs bras for women who have survived breast cancer and had mastectomies or reconstructive surgeries. The company offers well-fitted bras for all types of women fighting breast cancer, including those who are going through radiation therapy. Dana wants women who wear AnaOno bras to feel confident about their bodies and strengthen their relationships with themselves and their partners.

Dana Donofree was a 27-year-old aspiring fashion designer when she was diagnosed with breast cancer.

“My diagnosis was earth-shattering and out of the blue. You find yourself in this crazy, cosmic universe when you’re diagnosed,” she said.

While fighting the disease into remission, she had a mastectomy, which removed both of her breasts. Afterward, Dana decided to undergo reconstructive surgery, an experience that left her feeling as if she had a new, different body.

“I didn’t feel beautiful,” she said. “My nipples were gone, my breasts were gone — how was I supposed to feel sexy?” 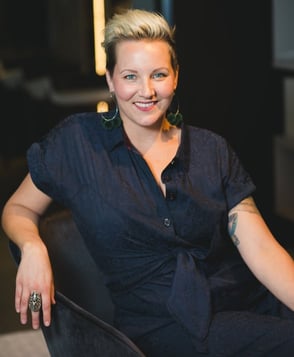 Dana said she didn’t want to be intimate with her husband because she didn’t like the way she looked. She felt broken, a feeling all too common among breast cancer survivors who have had mastectomies or reconstructive surgeries.

Longing to feel better about her body, Dana decided to use her training as a fashion designer to create beautiful bras for herself. Dana believed that if she could like the way she looked in a bra, then she would feel more confident and empowered in other areas of her life, too.

“I started designing sexy, pretty intimates that covered my scars and supported my new body,” she said.

The bras made Dana feel better about her body, and she soon discovered that many other women had the same issues with their post-cancer bodies. So she founded AnaOno to bring her sophisticated and beautiful bras to survivors and those living with breast cancer.

Dana said she felt that all survivors should have the chance to feel desirable and self-assured after surgery — whether they’re dating or married. She also realized it wasn’t just young women who wanted to feel more confident; women of all ages had the same desire.

That’s why AnaOno, which is based in Philadelphia, makes bras for a wide age range of survivors and those undergoing treatment. Dana wants to help women feel more like themselves, and a bra is a natural place to start.

“Simple things that bring back a sense of normalcy can spur the healing process,” she told us.

Beautiful Bras Boost Self-Esteem in the Bedroom and Out

When she started AnaOno, Dana thought that most of her clients would be younger women around her age. That was not an unfounded assumption, as breast cancer is the most common cancer type for women under 40.

So she started designing lacy bras and the type of lingerie that women who were not breast cancer survivors would want to wear.

But, in AnaOno’s early days, Dana got a call from a woman in her 60s who said that she loved Dana’s bras, but felt she was too old to wear them.

That conversation showed Dana that she needed to make her bras more accessible to breast cancer survivors of all ages and style preferences. And the company website is covered in affirmations, including “We’re in this together.”

As part of that message, AnaOno also hires women who can support clients who can’t travel to the studio for a fitting. With help from staff members, women who live outside of Philadelphia can easily find the right styles and sizes.

“We find empowered women who say, ‘We’re going to hold your hand and get you through this,’” Dana said.

And the women who shop at AnaOno are as diverse as the bras the company sells. Their goals often change after a breast cancer diagnosis, so the bras they choose reflect how they want to live their new lives.

“Some women want to get back into the bedroom, with the sexy, lacy intimates,” Dana said. “Others decide to get divorced after their cancer and want to redefine their confidence.”

Items for Different Stages of Treatment and Recovery

“A lot of women have their natural breasts, while some of them have been reconstructed, and their skin is tight,” Dana said.

She wanted to provide women with the bras they needed at every stage of breast cancer treatment and beyond. Some women choose to have a double mastectomy but still want to look pretty in a comfortable, attractive bra. The company also makes unilateral bras for women who have had a single mastectomy and offers other products for post-reconstructive surgery. 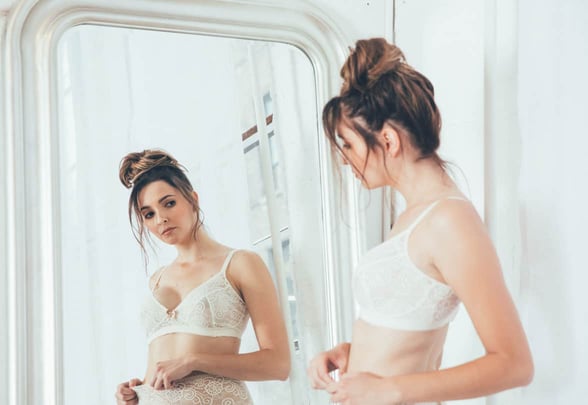 AnaOno makes bras for women at different stages of fighting breast cancer, from radiation to mastectomies.

The company also makes other types of clothing that can be difficult for breast cancer survivors to find in other shops, including swimsuits, loungewear, underwear, and breast forms.

Following mastectomy surgery, women often have drains they need to take home, and Dana said that family members and friends often come over to provide food and child care. So women don’t want to look like hospital patients.

“We make a loungewear collection that helps you manage the drains and keeps you looking like you,” she said.

In the future, AnaOno plans to provide women with even more. Dana wants to launch a sports bra line, which is the company’s most-requested item. And she intends to design sexier intimates, as well. Because the need for bras like these is international, AnaOno is also expanding to have more of a global presence.

“We provide a solution for every phase of the diagnosis,” Dana said. “We want to have something for everybody.”

Like Dana, many women feel discouraged after undergoing treatment — or surgery — following a breast cancer diagnosis. While they may have fought back against a terrible disease, their bodies often don’t look the same as they once did. Dana has seen firsthand how AnaOno products can help women enjoy the way they look. That, in turn, often uplifts them in other parts of their lives.

Dana shares a story of a survivor who came into her Philadelphia shop for a fitting. She brought her husband and 7-year-old daughter with her. The woman had a difficult time with her treatment and surgeries, and was in considerable discomfort.

In the shop, Dana helped the woman select bras to try on. The woman was by herself in the fitting room for a long time, and Dana began to worry that none of the options fit her. Then the woman emerged from the dressing room with a smile on her face. 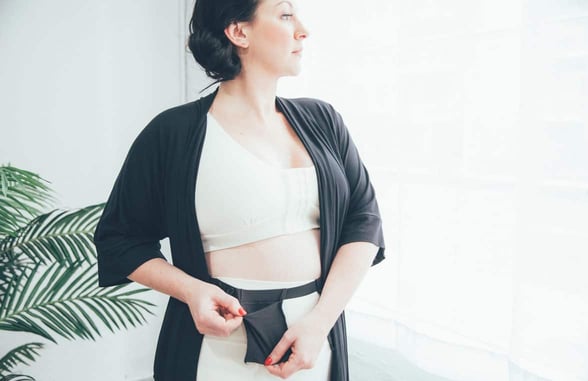 The company makes products to help women regain their confidence.

The woman exuded a newfound confidence, and a few weeks after the fitting, Dana received a letter.

“She told me how her daughter said that is was the first time she’d seen her smile since the surgery. I realized that our impact isn’t just on the survivors, it’s on the whole family,” Dana said.

Over the years, AnaOno has helped many breast cancer survivors regain some of the confidence they lost, and 10 years after her own cancer diagnosis, Dana said she takes pride in the influence she’s had on the lives of other women.

“I always receive emails and chats from people telling me their lives have changed in their new bras,” she told us. “And we have so many testimonials from women who are excited to get back out there and start dating again.”