The Scoop: Many travelers don’t enjoy packing into a crowded bus and heading to a prominent, overcrowded tourist destination. Alternative Athens distinguishes itself from traditional tour companies by offering a contemporary perspective and small group packages for romantic daytime or nighttime date tours of Greece. Many couples who have visited Greece before don’t want to do the same old thing, which is why Alternative Athens takes them to locals-only restaurants and secret spots that can foster memorable moments.

Many couples have signed up to take tours on large buses packed with people clutching cameras and elbowing each other for the best selfie spot. It may seem like every tour guide in a historic city goes to the same tourist destinations, and sometimes travelers can hear the same facts spouted by other tour guides just a stone’s throw away.

It can make experiencing a city feel cliché and exhausting.

When couples want to create romantic moments, whether on a honeymoon or a date during a couples getaway, being part of a big crowd can kill the mood. And for those who have visited a destination before, the last thing they want to do is the same thing everyone else is doing.

That’s why Alternative Athens plans unique tours for small groups and couples to enjoy historic, beautiful Greece as the locals do. 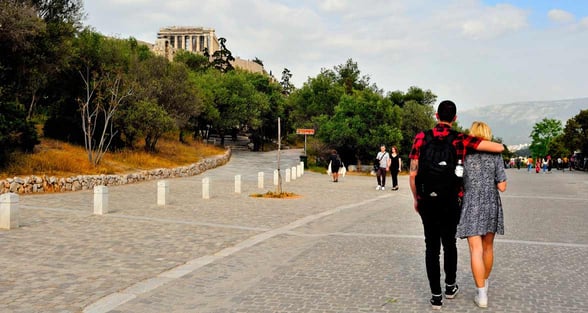 “I wanted to launch new things in the tour market that don’t exist and look at traditional tours from a contemporary perspective,” said Tina Sklavolia-Kyriakis, Founder of Alternative Athens. “Guiding has changed a lot in the past decade, and we use new touring techniques and guides that are very fresh.”

The company’s top-rated tours allow visitors to explore Athens in new ways. Couples can browse tour options on the Alternative Athens website and schedule a small group tour for an afternoon date to check out the city’s historic landmarks, local hangouts, or other nearby locations.

Alternative Athens even allows guests to create private itineraries that are fully customized to pique their interests.

Tina said she came up with the idea for a different kind of tour company when she was traveling the world many years ago.

“I always wanted to see how people lived, the inside of their houses, and where they eat and drink,” she said. “That was a time when Airbnb didn’t exist, so you needed to put in the effort to hang out with locals and see where they wanted to hang out.”

When her corporate job was put on hold due to the 2010 financial crisis in Greece, Tina shifted gears to provide the service she always sought in Athens, where she lived.

She started the company in 2013 when most tours in Athens were focused primarily on the city’s antiquities. Tina knew from her years living in Athens that the city was home to a vibrant arts scene that visitors wouldn’t know about unless locals showed them around. 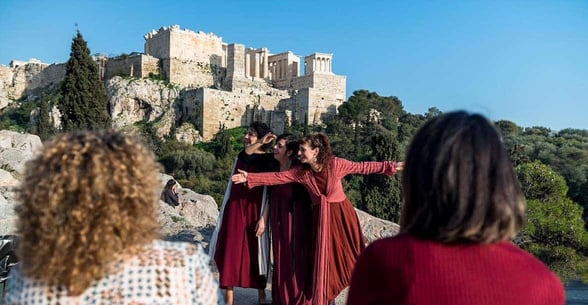 Visitors can see the city through a different lens on Alternative Athens tours.

As her company grew, Tina expanded the types of tours from the arts to other cultural interests in Athens. The team now offers private outings and tours with small groups of up to 12 people. Other tour companies cap their groups at 20 or 30 participants, and it can be tricky even to hear what the guide is sharing with such a big crowd.

Couples can sign up for a tour online, where the company has all of its package options available. Most of its tours embark daily during the summer months, so couples can have an encore date if they enjoy one of the tours.

Only Hiring Knowledgeable and Personable Guides

Along with the unique tour options and intimate groups, another difference between Alternative Athens and traditional tour companies is its guides. Tina said they only hire bilingual guides who can make human connections and speak on a wide range of subjects.

“We’ve never had a bad review of a guide who wasn’t knowledgeable. Our customers want connections with a country and their culture,” she said. “We ensure our guides can adapt to different cultures by default, not by effort.”

As a result, couples who sign up for afternoon date tours with the company feel extra special. Travelers can choose from city tours, tours of the Acropolis from a different perspective, food tours, and nightlife tours.

For example, guides can show groups a hidden bar located on the rocks or take them to the Temple of Poseidon, which is said to offer the best sunset view in all of Athens.

Tours also visit the highest point in Athens, which offers a breathtaking bird’s eye view of the city, and other ancient sites often overlooked by other tour companies.

“We can show you a nice spot in the evening when the Acropolis is lit up,” she said. “It’s green and quiet, and you sit on ancient stones.”

Another popular tour for couples on a date takes them about 20 minutes from the center of Athens to the seaside, where there is a beautiful promenade for walking. They can then discover small, hip nightclubs right on the sea that give them the feel of being on an island.

Tina said the company is always open to meeting personalized requests from clients. A couple of years ago, Alternative Athens received a call from a man who wanted to propose to his girlfriend in Athens in a different way.

He asked to book spots for a popular art tour, but he asked Alternative Athens to go a step further and work with an artist to create a unique piece of art for his special someone. He wanted it to feature special symbols that only she would understand.

It was a big undertaking, but the team was up for the challenge and created a mural in the early hours before the tour. No one else had signed up for the tour because it was the end of the season. But the man wanted a crowd when he surprised her.

So, members of the team stood in as tourists as they walked around the city. At one point, the girlfriend was tired as she was pregnant and asked to stop the tour. Everyone encouraged her to keep going since the special mural was at the end.

“When she saw it, she read the message, and they looked at each other. They started crying, and everyone started crying,” Tina said. “They later sent a picture of their baby. It was really nice.”

Alternative Athens works hard to customize tours and create new experiences. That approach is even more important as the tourism industry works to regain its footing after the slowdown due to the COVID-19 pandemic. Tina said the company has taken the time to streamline its processes and improve its offerings.

In the meantime, the company sent its clients postcards for the holidays from the Acropolis, wishing to see them again when everyone is wiser, more relaxed, and enjoying travel at a more authentic pace.