The Scoop: The world produces nearly 300 million tons of new plastic each year, and about 10% of that plastic will end up in the ocean. That’s why the 5 Gyres Institute, a nonprofit focused on science and policy, wants to eliminate plastic pollution. The organization aims to accomplish that mission through research, education, and adventure. The Institute offers opportunities for individuals, couples, and families to collect data about plastic trash and encourage lawmakers, corporations, and everyday citizens to stop producing and using so much plastic. For its dedication to providing people with opportunities to fight global plastic pollution, 5 Gyres Institute earns our Editors’ Choice Award.

In 2008, the 5 Gyres Institute in Los Angeles launched with a memorable feat to spread awareness about plastic pollution. The Institute’s then-engaged Co-Founders Anna Cummins and Marcus Eriksen, with fellow marine scientist Joel Paschal, built a raft made from a discarded airplane fuselage and plastic water bottles.

Then, Marcus and Joel sailed the raft from California to Hawaii — straight through one of the largest patches of plastic trash in the ocean. Anna ran logistics from the ground. Their mission raised plenty of awareness, but it was anything but a leisurely excursion.

“There were times when I thought he wouldn’t come back at all,” Anna said.

At one point, when he and his co-navigator weren’t making much progress on their voyage, Marcus wrote a love letter to Anna, put it in a bottle, and dropped it in the ocean. He wanted to let her know how much he cared about her if his mission failed.

Luckily, Marcus completed his journey, and the pair later married. Now, they continue to spread their message about the widespread plastic pollution problem through the 5 Gyres Institute, which offers educational resources and volunteer opportunities for couples.

Eight years after his trip, a couple far away from where Marcus dropped his bottle into the ocean discovered the message on a beach.

“We got an email from Guam saying that the bottle had washed up there. It had traveled 6,000 miles across the Pacific Ocean,” Anna said.

The couple now has the letter framed on the wall of their Los Angeles home. They see it not only as a symbol of their love but also as a reminder of the plastic pollution problem. Because Marcus used a glass bottle, it survived its trip across the ocean intact.

But plastics are no match for the power of the ocean and break up into smaller microplastics that wreak havoc on the oceanic ecosystems. Discarded trash can travel thousands of miles, but, if that trash is plastic, it could negatively impact aquatic life for generations.

For its efforts to reduce plastic pollution while allowing couples and families to work together to fight the global problem, the 5 Gyres Institute earns our Editors’ Choice Award.

The Institute gets its name from the five major gyres located in the North and South Pacific Oceans, the North and South Atlantic Oceans, and the Indian Ocean. A gyre is a massive circulating ocean current that concentrates vast amounts of plastics and other waste. If a piece of plastic gets trapped in a gyre, it will circulate there for at least 10 years, unless a marine animal eats it or it sinks to the bottom of the ocean.

The 5 Gyres Institute has a three-part plan to eliminate plastic pollution from the world’s oceans. The first component is science-based solutions that can diminish the amount of plastic in the sea.

As the Institute’s Chief Science Officer, Marcus leads many projects aimed at proving how plastic winds up in the ocean and proposing policies to lessen that impact.

The Institute recently finished its three-year San Francisco Bay Microplastics Project. The goal was to discover how plastics end up in the bay, as well as how they affect aquatic ecosystems. One surprising finding from the project is that microplastics often enter the ocean through stormwater runoff and treated wastewater. Some of these plastics include tire fragments and waste from single-use plastic straws, cups, and plastic bags.

After three years of study, the Institute developed policy recommendations for the California legislature, corporations, the City of San Francisco, and the public. One suggestion for individuals, according to the report, was to “support legislation that reduces single-use plastics and plastic packaging in the Bay Area and statewide.” Another was to “encourage [the] textile industry to standardize methods to understand microfiber shedding.”

Multifaceted solutions involve a wide range of stakeholders, but, according to 5 Gyres, that is the only way we can eliminate plastic pollution.

Plastics are a more significant problem than other types of waste because they never biodegrade. Practically any plastic that has ever been produced still exists today. And if it isn’t recycled, it will end up in landfills or oceans.

“The U.S. is scrambling to figure out what to do with its plastic waste,” Anna said. “Now that our recycling system has crumbled, due to China’s National Sword Policy, we’re landfilling and even burning it, which is creating health and justice issues. People are starting to see that we can’t send this problem away for someone else to deal with it.”

Since its founding, 5 Gyres has seen a shift in public opinion regarding plastics. In 2008, the Institute often had to convince the public that plastic was a significant problem. So, one of 5 Gyres’ initial goals was to spread awareness of the scale of this issue through attention-grabbing missions. 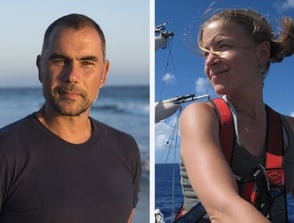 Marcus Eriksen and Anna Cummins founded the Institute to raise awareness about the plastic problem.

In addition to Marcus’ sea voyage, the couple also embarked on a cycling outreach tour from Vancouver to Mexico in 2009.

“Along the way, we got married, wearing a dress and a tuxedo made from plastic bags,” Anna said.

They continue that spirit of adventure and education by taking committed anti-plastic advocates on expeditions to monitor plastic trash in the world’s oceans. Recently, the Institute completed its 19th expedition to study the impact of plastic pollution and raise global awareness.

5 Gyres has traveled to locations including Belize, Ecuador, Bali, and even the Arctic to conduct research and connect with local advocates who want to reduce the harmful plastics in their communities.

“People need to think of ways to transition away from plastics, which are made from fossil fuels, in their schools and workplaces. We want to help people feel proactive instead of sitting on the sidelines,” Anna said.

Since Anna and Marcus founded the 5 Gyres Institute, they have only strengthened their bond through a shared commitment to eliminating plastic pollution. Passionate people around the world have also contributed to the Institute’s projects.

One simple way to get involved is by joining the Ambassador program, to connect with other change-makers globally, and engage in actions like participating in a TrashBlitz in your community. Participants choose a neighborhood and area where they’ll collect plastic trash. In addition to recycling that trash, they also log what they collect through an app that records how much food packaging, textiles, or detergent packaging they may discover.

The 5 Gyres Institute takes a scientific approach to raising awareness.

“The idea is to pick up and record every tiny speck of plastic to get a sense of what’s in our communities,” Anna said.

That data provides the Institute with more information on which industries or companies are the greatest contributors to plastic trash.

“We plan to take the data we collect to policymakers and say ‘This is what we found.’ With that information, we want to try and engage corporations in positive change,” Anna told us.

People who are inspired by the 5 Gyres Institute’s mission can also become ambassadors. So far, the organization has more than 1,000 ambassadors in 45 U.S. states and 64 countries who discover and lead projects in their communities. Those could be volunteer projects to recycle plastic waste that may end up in waterways or to provide information about zero-waste lifestyles.

Whether you decide to eliminate your plastic consumption or lead a volunteer project in your community, Anna, Marcus, and the 5 Gyres Institute team will be happy to have you and your loved ones join the cause.

“We feel excited and humbled that people want to get involved. We’re excited to play a part in bringing this issue to the forefront, but we can’t do this alone,” Anna said.