The Scoop: When individuals and couples find themselves wanting to escape into nature — but are stuck in the city — they often plug into Taptanium. The popular app suite allows users to find peaceful sounds for sleep or relaxation that transport them into a more natural world. Taptanium apps, including Thunderspace, Windy, Sunny, Away, Flowing, and Rainy, have already been downloaded 5 million times, and more are in the works. App Creator Franz Bruckhoff said his goal is to offer high-quality, three-dimensional nature recordings that can help people maintain their peace, improve their sleep, and achieve a better quality of life.

Gentle rains, heavy thunderstorms, lapping ocean waves, and flowing streams can help people sleep better, boost creativity, and improve their overall quality of life. But they don’t have to be out in nature to reap the benefits. Studies show that just listening to the sounds of the natural world can have a profound impact.

Even in the city, those sounds can help people find inner peace and reduce stress caused by work troubles, relationship issues, or other life problems.

Those benefits are why more than 5 million people have downloaded the nature sound apps developed by Taptanium. Creator Franz Bruckhoff said his goal was to capture soundscapes that promote a mindful, calming experience — and a good night’s sleep.

Users can also turn on the apps as a way to block out other unwanted sounds — including traffic noise, bothersome neighbors, or even a snoring partner.

Taptanium brings the sounds of nature to people through its suite of apps.

“It’s valuable to stop dwelling on those things for a moment and start thinking about something else,” Franz said. “Drowning out noise can help you sleep and also calm you down when you are very stressed. And people often use the apps while traveling and sleeping in hotels.”

Franz began working on the apps back in 2013, and they’ve quickly become some of the most popular nature sound downloads for Android devices.

Users can enjoy the apps on headphones, earbuds, or surround sound speakers — through which they can hear the complexity of the environments. The apps never contain any human-made noises, which is rare among nature recordings.

Sounds of nature activate a feeling of security and comfort from deep within our subconscious. That peaceful feeling can get disrupted — or even blocked — by daily life in large cities.

“When people are in those big cities, they lack exposure to natural sounds. They only hear traffic noises, and those are a significant source of stress,” Franz said.

And the calming effect of a natural soundscape can work even better than music. That’s because music is often associated with memories — which can be good or bad. The sound of a beach, forest, or rainstorm can be a more neutral canvas.

Plus, the Taptanium apps are entirely free of sounds made by humans. That means no airplanes, talking, or cars idling by. That kind of serenity is almost impossible to achieve unless you plan on hiking miles into the middle of a national park. And even there you will most likely hear airplanes.

“That’s a big advantage. You can go to a national park and experience it, but if you want to hear the same sounds, you can use our apps with headphones,” Franz said.

He also recommends that people interested in relaxing and improving their sleep start with Rainy, which is free. Within the app, users can purchase Rainy Plus, which offers unlimited access to audio scenes and content. Each of the apps also features mystical and unique artwork. And Rainy Plus is just $2.99 every three months, or $9.99 for the year.

Taptanium’s other apps range in price from $1.99 to $3.99. According to Franz, the most popular app is Thunderspace, which includes simulated lightning and thunderstorm illusions when the camera flash is facing up or display is facing down.

You Can Reduce Daily Friction & Enjoy Time With Loved Ones

Franz said the 5 million app downloads are nearly equally split between men and women. And they seek out the sounds for many different reasons, including to help their mental and physical health.

“There are studies that say it’s healthy to listen to nature, especially for those who suffer from anxiety and depression,” he said. “One person reached out to me and said it saved his life. He wanted to commit suicide but decided to listen to his favorite thunderstorm one last time, and it changed his mind.”

Taptanium’s apps can benefit many couples, too. Often when one partner starts snoring or tossing and turning the other may suffer from poor quality of sleep. That can quickly evolve into resentment and fights — not to mention low energy and productivity during the day.

The Thunderspace app lets users relax to the soothing sounds of a thunderstorm.

Parents also love the apps, because they help children relax and fall asleep faster. That can mean more quality time for the adults in the household. And the kids benefit from a peaceful nighttime ritual.

Franz said it’s also common for app users to escape their overthinking and sit and breathe deeply for anywhere from 10 minutes to more than an hour.

“The sound is recorded in 3D in ambient microphones, so it captures as you hear. You have the separation of left ear and right side,” he said. “You can hear the beach in front of you but the birds far away. It’s very immersive. It’s a good way to escape and let your mind travel somewhere else for a while.”

Franz said that he uses Taptanium apps every night with his girlfriend as part of a mindfulness ritual before bed. They both put on headphones and listen to natural sounds for 10 minutes, and then they light candles and play a singing bowl — a goblet-shaped bell. 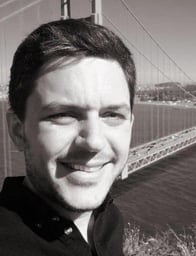 “That’s a nice way to get rid of the stress from the day, to stop thinking about our work problems,” he said. “And doing something like that is good for a relationship. It’s easy to let the day slip by, and you rarely have the chance to talk about other things unless you’re conscious about it. It’s a great mindfulness tool.”

In the upcoming months, Franz said he plans to work on an app that incorporates all of the nature sounds he has collected for Taptanium’s apps. He plans to distribute it for free because he believes it’s something that can help individuals and couples throughout the world.

The new app will also feature an integrated timer so it can be used to maintain a ritual, just as Franz uses it. With time, he hopes that couples will find peace and space within their relationships to talk about difficult issues and allow individuals to remember the beauty around them if they’ve just come out of a relationship.

“It feels good to produce something that helps people, and I truly believe that these apps do,” Franz said.