My Body Gallery™ Celebrates Women of All Shapes and Sizes Through Natural, Undoctored Photos

The Scoop: Women around the world are more dissatisfied with their bodies than ever, and they continuously see doctored photos of other women with supposedly perfect bodies on social media and in movies and TV shows. To combat the negative self-image epidemic, Odessa Cozzolino started My Body Gallery, where real women can post unedited pictures of themselves in an online gallery. Women are empowered by posting pictures of themselves and by seeing photos of others who have their body types and dimensions. My Body Gallery also recently launched a mobile app that will make the platform more user-friendly.

In the United States, 91% of women are not satisfied with how they look and often go on diets to lose weight and fit beauty ideals. That body shame tends to start early. By the time girls turn 17, 78% report being “unhappy with their bodies.”

Those feelings of dissatisfaction may be exacerbated by the fact that women feel like they can’t achieve the types of bodies they see in the media. In beauty magazines, on TV, and in movies, women and girls are constantly bombarded with images of those “perfect” forms that don’t look like their own. 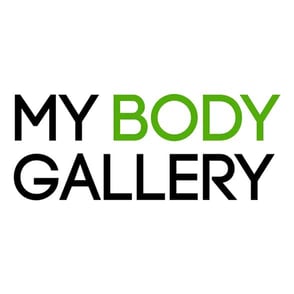 My Body Gallery was founded to help women feel better about their bodies.

Odessa Cozzolino started getting discouraged by the constant put-downs she heard women say to themselves more than a decade ago.

“As a professional photographer, I was doing a lot of family portraits, engagement shoots, and weddings. It was frustrating to take pictures of women who would say ‘Oh my God, my nose looks big’ or ‘My ears stick out.’ It was just constant,” she said.

She noticed that their spouses or friends weren’t the ones disparaging their looks; women were their own worst critics.

“Nobody else sees what you do. Your flaws are just in your head,” Odessa told us.

She wanted women to see themselves as others saw them. With that goal in mind, she founded My Body Gallery, a site where women could post undoctored photographs of themselves, along with their heights, ages, and weights.

Not only does the site empower women by allowing them to share pictures of how they naturally look, but other users can see authentic photos of women who have similar body types.

My Body Gallery launched in 2010 and has continued to grow in popularity for nearly a decade. Recently, Odessa launched a companion mobile app catering to a new generation of women and girls.

When Odessa set out to turn her idea for My Body Gallery into a reality in 2010, she faced criticism.

“When I asked a web developer to build the website, he said, that’s a stupid idea,” Odessa told us with a laugh.

But the web developer went home and told his girlfriend about the gallery, and she was excited to know when it launched. Then he told his sister, who was equally interested.

“He called me back and said ‘You might be on to something here,’” Odessa said.

It turns out that it was something big. My Body Gallery found success soon after its launch, and word of the website spread through numerous media channels — including Jezebel, Refinery29, and “Good Morning America.”

The site had plenty of fans in the United States, but women from around the world also found the it helpful. As Odessa found out, body image issues were not just an American dilemma.

Women from around the world share undoctored photos of themselves on My Body Gallery.

“We have users in every country in the world, and every year we’ve gotten more and more users, which is unreal,” Odessa said.

Over the site’s nearly 10 years in operation, Odessa has received countless thank-you emails and an abundance of positive feedback. She shared one story of a woman who had been in therapy, and even visited hospitals, to help fix her body image issues.

“She said ‘I spent the last 24 hours on your website. It helped me accomplish what no one else has for 27 years,’” Odessa said.

The website remains just as relevant today as it was when it started. When Odessa shares the international popularity of My Body Gallery with her male tech colleagues, they’re shocked.

“When I tell them I have a website that gets 3 million hits a month, they say ‘Why haven’t I heard of it?’ And I tell them ‘It’s because you’re all guys!’” she said.

On My Body Gallery, users can browse photos submitted by women of different ages and races. When uploading an image, women can also share a story about their body image struggles, along with their measurements and body shape.

What’s clear when browsing the gallery is that women are all unique. Some women are shaped like hourglasses, while others are shaped like pears. Two women who are 5’5” and weigh 150 pounds may look completely different depending on their body types.

“There are more than 60,000 photos on My Body Gallery, and they are all user submitted. It is the largest database of photos that aren’t Photoshopped that I know about,” Odessa said.

The women on the database look quite different from the models and actors society is used to seeing. Edited photos are the norm in magazines and online, and many people touch up their images before uploading them onto social media. Undoctored photos are rarely seen in mainstream media, which makes My Body Gallery even more unique.

The gallery can help women re-build their self-esteem because, by seeing others, they start to view themselves more kindly.

When women see someone who looks like them on My Body Gallery showing themselves off proudly, those with self-image issues may realize that they look better than they thought they did.

My Body Gallery is Expanding With a Mobile App

My Body Gallery has had an untold impact during its nearly 10 years in operation. Recently, Odessa tracked My Body Gallery’s traffic and found that 78% of users were accessing the website through their mobile devices.

“The website works on mobile devices, but it isn’t ideal,” Odessa told us. “So, we developed a better way.”

To improve user experience, she partnered with Blackburn Labs to make a mobile version of the platform for iOS and Android devices. Users can download the app from the Apple App Store or the Google Play store.

Odessa is thrilled that the My Body Gallery mobile app will reach even more modern women — and new generations of girls — who may not have visited the website. Reaching that new audience is particularly meaningful for Odessa, who has a 17-year-old daughter.

“I’m so grateful to every single one of these women who have submitted photos. They have so much bravery to put themselves out there.” — Odessa Cozzolino, Founder of My Body Gallery

“The best thing you can do for your daughter is to say something positive about yourself. I do this with my own daughter. Even if I think I don’t look good, I say to her ‘I look great today,’” Odessa said. “What if your daughter hears you talking bad about yourself, and then people say she looks just like you?”

Odessa hopes that her site can make a difference and diminish some of the shame women have about themselves. After all, if women worry less about how they look, they’ll have more time and confidence to accomplish other goals — including building relationships, reaching career milestones, and practicing hobbies.

The more photos of women with different bodies that users see, the more satisfied they may become with themselves.

“I’m so grateful to every single one of these women who have submitted photos. They have so much bravery to put themselves out there,” Odessa said.