The Scoop: If you’ve lost that loving feeling, you and your partner can download Kindu to dramatically improve your emotional and physical connection. Kindu is a popular app that inspires couples to talk about their sexual needs and desires. The app prompts conversation with Daily Decks, Wild Cards, Celebration Packs, and Showcase Packs developed by relationship experts. Individuals in a relationship respond yes, no, or maybe to various romantic ideas, and their partners only see the ideas ranked yes or maybe by both parties. The double-blind system gives Kindu users anonymity on sensitive topics and opens couples up to discovering shared interests and meeting each other’s needs in the bedroom.

I’d been dating a guy for about a month when he began looking for the catch. He’d surprise me with off-topic questions. “You don’t smoke, do you?” No, I don’t. “Are you looking for something serious?” Yes, I am. He’d spring these pop quizzes on me, and, honestly, it was starting to grate on my nerves.

One night, he pulled away from a kiss to ask, “You don’t have any weird kinks, do you?”

I immediately felt judged, threatened, and a little insulted. What right did he have to ask that? The way he phrased the question pretty much guaranteed that he wouldn’t get an open-minded answer. He didn’t create a safe space to talk about our sexual compatibility, so we didn’t. I shrugged off the question, said I was tired, and showed him the door. 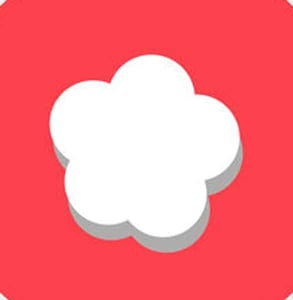 Kindu provides a safe and private platform where couples can talk about their sexual needs.

Whether they’ve been together a month, a year, or a decade, it’s important for couples to talk about their sexual preferences and fantasies without judgment. However, many people feel uncomfortable with those conversations and hedge (as I did) or go about it the completely wrong way (as my would-be boyfriend did).

Kindu inspires couples to tackle the subject of sex in a mature and compassionate way. This app encourages people to engage in a thoughtful dialogue about what each person wants. Its interactive features help couples build intimacy by owning their desires and finding commonality.

“We want Kindu to focus on intimacy,” said  Thomas Kurver, the Founder and CEO of Kindu. “If you have good intimacy in your relationship, it leads to a better sexual relationship and sexual satisfaction.”

In 2008, a group of med students inspired by a human sexuality class banded together to design an app where sexual fantasies were no longer a taboo subject. They had experienced firsthand how uncomfortable people can be when talking about sexual desires, and they decided to do something about it with this passion project.

Thomas and his classmates created a website, which later launched as the Kindu app, where people could explore their sexuality in a private and positive space. And it took off. 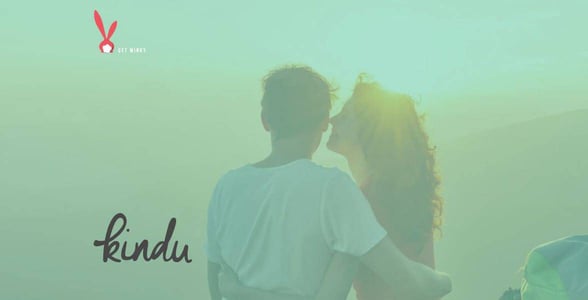 Today, Kindu has an active user base in the US, Canada, Europe, Japan, Indonesia, and several other countries. The app appeals to couples of all ages, but a majority are under 30 years old. These young people are interested in trying new things with a partner and use the app to strengthen their relationships.

Andrue Henderson wrote in a five-star review that Kindu “gave me and the wife ideas on spicing things up.”

Kindu’s interactive platform facilitates sexual expression, but Thomas was quick to acknowledge that it’s not a catch-all solution for couples experiencing serious issues in the bedroom.

“We’ve designed Kindu to help couples, but we’re not a substitute for sexual therapy or marriage therapy,” Thomas told us. “It’s just a fun way for couples to express their desires and be accepted by their partners.”

The Wild Card Feature Allows Users to Direct the Conversation

Kindu has a fairly simple interface. People create a profile and then pair up with their partners on the app. Then the fun begins and couples start answering the Daily Decks, which prompt users to say yes, no, or maybe to various sexy, flirty, or romantic activities. The app only allows couples to see each other’s responses when both agree (or at least say maybe) to a prompt. If it’s a no, it’ doesn’t come up in the conversation. That element of privacy frees couples to be honest about how they feel and what they want.

In addition to the Daily Decks, Kindu offers a Celebration Pack for special occasions (hanging up mistletoe, anyone?) and a Showcase Pack full of resources contributed by guest authors, sponsors, counselors, and everyday couples. 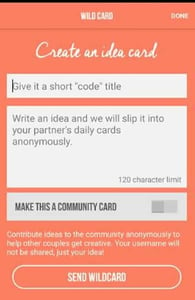 User-generated Wild Cards give people an anonymous way to make a specific inquiry.

Thanks to Kindu, couples can easily see where they match-up and what fetishes, fantasies, and desires they have in common. Members can even create their own card, which is called a Wild Card, and insert it into the deck with a special request.

The card will look like all the other cards, so your partner won’t know you put it there. But you can out yourself, if you like, by adding a personalized message. Thomas said many couples use the Wild Card feature to surprise each other with kind messages and fun suggestions. “They’ll say things like, ‘Thanks for listening to me last night,'” Thomas said. “That’s a spin on it that we didn’t expect.”

Kindu offers an imaginative array of fun ideas — from planning a lingerie night to surprising a partner in the shower. So far, Kindu’s decks include over 1,000 ideas and resources, and it is always adding more thanks to user suggestions and feedback. The app’s lighthearted and open-minded approach encourages users to have fun with it. Thomas said he’s not above throwing in a cheesy pun or fun innuendo to break the ice and give users a chuckle.

“We try to keep everything lighthearted,” Thomas said. “We want partners to laugh together and enjoy their time together. That’s what Kindu is all about.”

Thomas bought out his partners a few years ago and now runs the Kindu app all on his own. He describes it as his hobby. While the app isn’t lucrative enough to be a standalone business, he believes it’s important to put it out there as a resource for couples around the world. He sees its impact when couples send him messages saying it helped them communicate and connect. 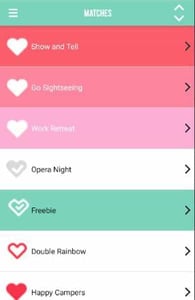 Communicate about your fantasies on Kindu.

When asked what his team is like, Thomas chuckled and told us that it’s pretty small. It’s just him, a part-time writer, and the occasional programmer.

“People tend to think we’re some corporation, but it’s really just a couple of us doing this,” Thomas said. “We’re a pretty laid-back team.”

In the coming months, Thomas plans to create more dynamic content for the app — including travel packs with date recommendations for popular destinations — to trigger more conversations between loving couples. Whether Kindu is suggesting date activities or leading relationship exercises, the app is an undeniably positive force in the dating scene.

“We’re focused on the importance of intimacy, communication, and exploration,” Thomas said, “so everything we do will have that at its center.”

Kindu Teaches Couples How to Satisfy Each Other

Discussing sex with a romantic partner can be awkward, even if you’ve been together for a while. We spend our lives protecting ourselves from harm and judgment, and then, in the span of a single conversation, we have to be completely vulnerable with someone else. It’s the responsibility of that person to be open to anything that pleases his/her partner because one negative comment can shut down any hope of honesty and intimacy.

Partners need to be loving and supportive of one another, particularly when it comes to sexual desires, because that’s how you deepen a relationship and cultivate a satisfying sex life. Kindu can help further that discussion and give couples ideas for their next night in.

On Kindu, nothing is taboo. No kink is too weird to be discussed. This app leaves everything on the table and empowers couples to decide what they want by exploring common ground.

“Apps are a tough business to be in,” Thomas said, “but it’s worth it to know we’re helping people and opening them up to different forms of love.”