The Scoop: As an up-and-coming dating app, Crush promises to bring integrity and authenticity to the online and mobile dating scene. The app has changed the swiping game by providing users with more verification tools and profile information. Plus, its matching system empowers single women to give their seal of approval to every potential match. As a show of good faith, Crush users have to like one another before they can engage in a private chat or play a game of Truth or Dare on the app. Crush is available for free on Google Play and the App Store.

Today’s young adults have grown up in an era of technology and advancement, and they’ve become understandably reliant on smartphones and laptops to deliver information, provide support, and connect them to a global community.

A 2018 study found that the average 20-something spends 10 hours a week swiping and chatting on dating apps. Typically, singles log in for 5 to 10 minutes multiple times a day, as if they’re checking the score of an ongoing game. 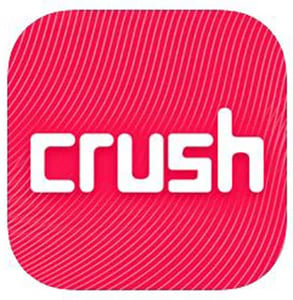 Crush elevates the dating experience for single men and women.

Despite putting a lot of time and effort into online dating, some singles still don’t get the results they hope for on swipe-based apps. One Tinder user tracked his dating progress for 28 days and found that he had a 7.5% success rate at turning mutual matches into real-life dates.

Swipe-driven dating apps may see a lot of user engagement and online matches, but they can fail to make a difference in the IRL dating world, and that’s not good for the overall dating ecosystem. Fortunately, Crush has embarked on a mission to do better by modern daters.

This forward-thinking dating app has taken the familiar swiping setup and created more values-driven options for singles seeking genuine connections. Crush users can send comments or likes to catch attention, and they can play a fun game of Truth or Dare to get to know someone better.

“We understand that women are tired of being spammed on other dating platforms — that’s why we made this app,” said Jasmine Young, the Co-Founder of Crush.

Breaking the Ice With a Game of Truth or Dare

The first step to creating a Crush profile is connecting to your Facebook account or phone number. This easy signup process takes only a few minutes.

Once you’re happy with your Crush profile, you can create your account and start swiping immediately. In the meantime, the Crush team will manually review your profile and remove anything that violates the Terms of Use. For instance, blurry selfies, nude pics, and stock photos are not appropriate for a Crush dating profile.

If you want to show dates you’re on the level, you can choose to use the photo verification feature on Crush. You’ll just need to submit a photo that clearly shows your face (no sunglasses, masks, or hats) as well as a real-time selfie that proves you are who you say you are.

One of Crush’s newest features is the Truth or Dare game, which is open to everyone free of charge. Crush provides possible truths and dares, and you can choose to answer or send one in a private chat to get the ball rolling in a flirtatious direction. Men don’t have to wait for women to unblock the chat to send Truth or Dare messages. 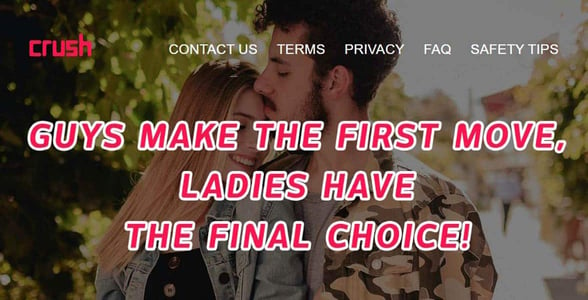 Crush offers free browsing, flirting, and messaging to singles over 18.

In addition to the Truth or Dare game, Crush members can like profiles, send messages, or like or comment on photos to get attention from an online crush. If, as you’re swiping on profiles, you accidentally reject someone good, you can shake your phone to undo your last decision and go back to that profile. Women receive notifications about their incoming likes, and they can choose to like that person back to open a private conversation window.

The Crush team supports single women throughout the online dating process. The team has even put together safety guidelines to help newcomers steer clear of trouble and build healthy and fulfilling relationships.

Crush can verify users by asking them to upload a selfie which matches their profile picture, but it does not conduct background checks, so use your best judgment when meeting new people online or offline.

Crush has gotten positive feedback from many users who have found friendship, romance, and love on the app. According to its internal numbers, about one in every 50 people who delete the app do so because they’ve fallen for and are currently dating an online crush they met on Crush.

For a dating app run by 10 people, that’s not too bad a stat, and the team hopes to continue growing and contributing to more love stories in the world. Crush currently has 4.6 stars in the App Store and Google Play.

“Crush dating online is a really cool idea,” said a female user in a five-star review. “Instead of swiping continuously without knowing anything about each other, it broadens the chances of sharing and impressing first.” 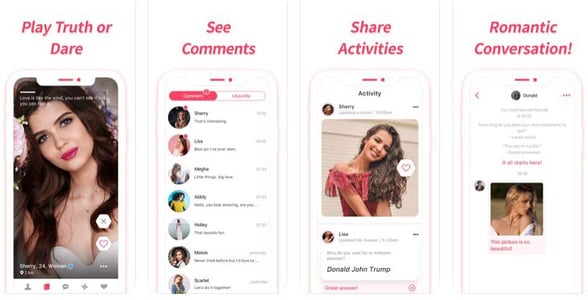 Singles can build a rapport on Crush by engaging in live chats with mutual matches.

A user named Marisa Cater said Crush was worth trying because it’s free and easy to get the hang of. “People here are more serious than other dating apps,” she said. She also praised the customer service team for being responsive to the needs of singles on the app.

Many female users say the Crush app is a breath of fresh air because it puts them in the driver’s seat and delivers higher quality matches. Single women won’t be overwhelmed with creepy messages and impersonal swipes on Crush, and that gives them the opportunity to be bold and pursue dates on their terms.

“Wow, I really love this app,” said Cynthia Lambert in a Google Play review. “I’ve met some friends here without paying. It’s better than most of the apps since you do not need to pay to send messages. Besides, people here are more friendly and serious.”

Crush Positions Itself as an Alternative to Tinder

After matching with 53 women in a month, one Tinder user was turned down for a date 29 times, ghosted 12 times, stood up three times, and canceled on two times. Only four women went on an actual date with him. That’s not encouraging for anyone thinking about investing their time, energy, and hopes in online dating.

Fortunately, not all dating apps offer such poor results. Crush has endeavored to create more meaningful connections between singles who are actually willing to go out on dates. Its free messaging and personality-driven matching has given singles the tools they need to get serious and attract real dates.

Crush has made dating more about conversation than matching, and that has been a game-changing move for many singles who have become burnt out by big-name dating apps.

“You know what’s wrong with Tinder? People just swipe right… and keep matching meaninglessly,” said a Crush user in a review. “This app makes things different! You guys get to know each other first, break the ice, and everything becomes much more open.”